1-2 against Saudi Arabia: Messi’s mission begins with a debacle 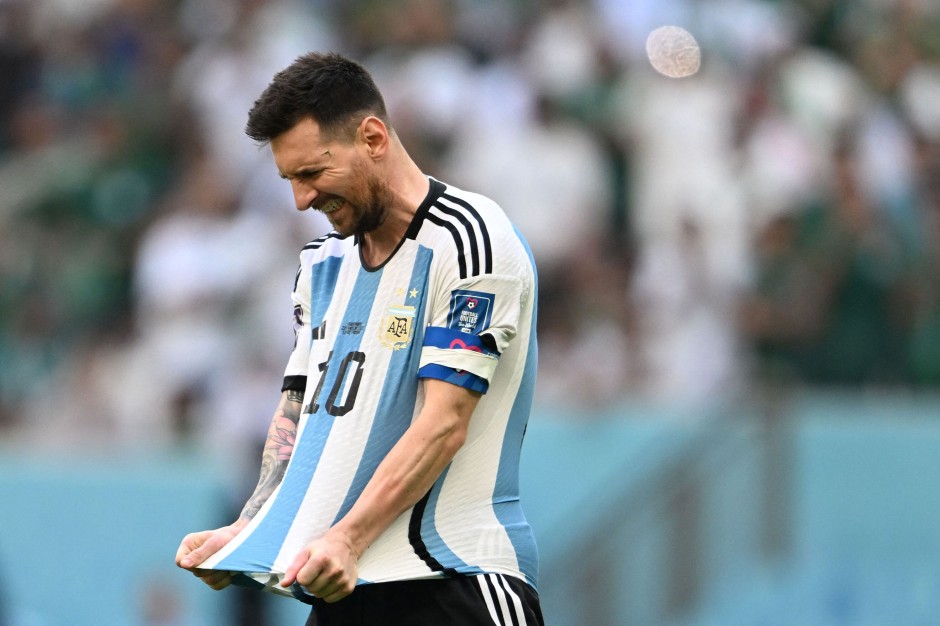 Lionel Messi kept looking desperate and grimacing: After a shock start for Argentina at the World Cup, the 35-year-old superstar does not have to think about a crowning title. After a start that was made for the superstar in the opening game against Saudi Arabia on Tuesday, the tactically excellent acting and passionately fighting underdog, cheered on by a green wall, dismantled the co-favorites from South America. Argentina lost the first game 1-2 (1-0) after 36 unbeaten games and, after the disgrace, suddenly has to fear the first World Cup preliminary round since 2002.

“It’s a very hard blow for everyone, we didn’t expect to start like this, we were confident that we would win, but things happen for a reason,” Messi said after the game in the mixed zone: “It depends on us and yes we have to win and fix that.”

After Messi took the lead in the tenth minute with a penalty kick worth discussing, Saleh al-Shehri (48th) and Salem al-Dausari (53rd) caused the first big sensation of the controversial World Cup in Qatar within a short time. The Argentinians had three goals disallowed in the first half, all for offside.

“We lost, it was because of our own mistakes. We should have scored more than one goal in the first half,” said Argentina’s Lautaro Martínez: “We’ll try to fix the mistakes next time.” Despite the disgrace, the team is still “highly motivated,” said the 25-year-old: “We want to progress and have to see what kind of mistakes we made.”

In the next group game next Saturday against Mexico (8 p.m. CET in the FAZ live ticker for the soccer World Cup, on ARD and on Magenta TV), Argentina is under a lot of pressure, but not this time after the ignominious knockout round in Russia four years ago having to leave after the group stage. At the end of the preliminary round, it’s against Poland for star striker Robert Lewandowski.

Messi takes the lead with a penalty

In Lusail everything seemed ready for the Messi gala. It wasn’t even two minutes before the first big murmur went through the final stadium. The first attack by the big favorite landed on the then 91-time goal scorer. From about twelve meters he tried to flick the ball into the far corner with his gifted left foot. But Saudi keeper Mohammed al-Owais dived and cleared – it was the prelude to what is probably the most memorable day in the career of the 31-year-old from Al-Hilal SFC. The Arab fans behind the goal got loud, really loud. Even with the anthem it was clear: This outsider wants to fight and will fight.

But things couldn’t have gone worse for them or better for Messi on his World Cup mission with Argentina. Referee Slavko Vincic rushed to the line: video evidence. After a Messi corner, Leandro Paredes was knocked down in the penalty area. Penalty kick, joy from the fans in sky blue and white shirts, horror from the supporters in green.

Messi stepped up. The captain, who passionately led the team to the Copa America title a year and a half ago, took charge. One miss, and who knows what would happen next. But Messi didn’t miss. A few steps running up, the previously great parrying keeper blocked, he pushed the ball into the goal accompanied by the whistles of the Saudi Arabian fans. It was Messi’s seventh World Cup goal in 20 games and the relief was palpable. It was the start he had hoped for his fifth and final World Cup – no other South American has ever competed in so many.

A win at the start was “fundamental” for the further course of the tournament, which should lead him back to Lusail’s stadium on December 18, Messi had said. And he kept going. 22 minutes: The ball was back in the net. But this time denied by the video referee. So did Lautaro Martínez’s goal just a few minutes later and on his second attempt in the 35th minute after Messi’s dream pass. A 0:4 after a good half hour would probably have broken the passionate fighting spirit of the Saudis under French coach Hervé Renard. But 0-1 didn’t mean anything, even though captain Salman al-Faraj had to leave the field injured before the break.

And just three minutes after the change of sides, the Argentinians around Messi suffered a heavy blow: the Saudis’ first shot on goal landed. As so often in past world championships, the defense revealed gaps again. With a powerful shot into the far corner, al-Shehri transformed the stadium in Lusail into an Arabic decibel temple. Nothing more was heard from the Argentine fans. And things got worse for them when al-Dausari put Saudi Arabia ahead with a dream goal.

Messi stood stunned near the halfway line before quickly claiming the ball – it’s now or never: the World Cup question came sooner than expected. But Argentina looked almost at a loss against these unleashed Arabs with a goalkeeper that drove Argentina to despair. The favorite could not use the many chances in the final phase. Especially because Saudi Arabia fought doggedly to the last second.

Are you part of one of the country’s fastest-growing brokerages?