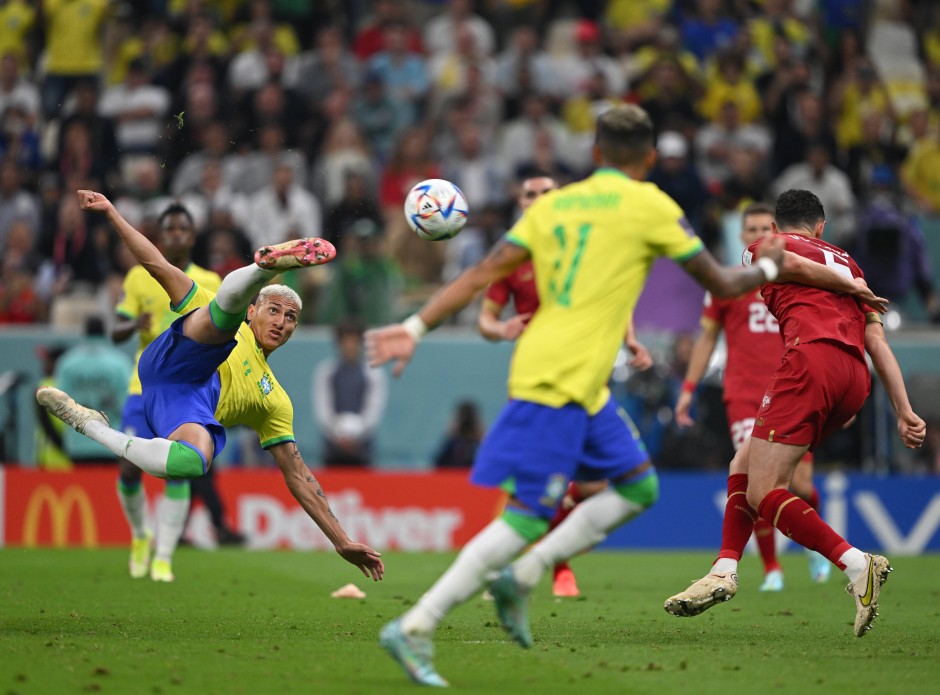 Brazil started their hunt for their sixth World Cup with hard work and a magic goal. In their first tournament game in Qatar, the Seleção beat Serbia 2-0 (0-0) on Thursday evening, also thanks to a gala performance by Richarlison. First, the attacker from Tottenham Hotspur dusted off from close range (62nd minute), then he put the ball in front of himself for a side kick (73rd) and completed a volley. After this fantastic goal, the 88,103 spectators in Lusail Stadium went wild.

“It’s crazy, that’s what you dream of as a child, scoring a goal like that in a place like that,” said the double goalscorer. “We managed to turn the tables in the second half and decide the game. I was scared not to come here at all,” said the attacker, who had been injured for a long time. “Richarlison is a brilliant striker, a great player. But he alone is not important, everyone is important,” said Casemiro.

The line-up already showed what kind of offensive power the Brazilians have. Neymar, Vinicius Júnior, Raphinha, Richarlison and Lucas Paquetá – five exceptional players with a clear attacking focus were in the starting XI. But if something went forward, it wasn’t initially through their individual class, but through the interface. Otherwise the compact defense of the Serbs could hardly be overcome.

Two ingenious vertical passes from Casemiro and captain Thiago Silva were just about defended by the Europeans in the first round. Likewise the attempt by Neymar (13th), who wanted to flick a corner into the goal. So it initially remained with the repeated attempts to break through the Serbian bulwark. Raphinha (35′) had the best chance to do so, and he was already through after a fine combination – but failed because of goalkeeper Vanja Milinkovic-Savic.

45 minutes of trouble – and then came Richarlison

Serbia limited itself to what Serbia is particularly good at: being unpleasant. The Seleção dominated the game, but they didn’t get anything for free. Without the injured former Frankfurt player Filip Kostic, the Serbs lacked the power to go forward. Contrary to what was announced, they hardly took place offensively. But in the game against the ball, coach Dragan Stojkovic’s team put everything into play. They tugged, pulled, straddled and fought: if the Brazilians were going to find a gap, they had to fit extremely well. Or hope for mistakes by the Serbs.

In the second half, not even a minute had been played when exactly that happened. Nemanja Gudelj lost the ball just before his own penalty area, which landed again at Raphinha – but again the FC Barcelona attacker could not get past the keeper. But Brazil drew closer. A powerful long-range shot from left-back Alex Sandro (60′) went to the inside of the post. But then Milinkovic-Savic blocked an attempt from Vinicius Júnior right at Richarlison’s feet and the Tottenham Hotspur striker converted from close range.

On the other hand, there wasn’t much to see from Neymar. The Paris Saint-Germain superstar struggled though. But sometimes he got bogged down in a dribbling, sometimes he failed to accept the ball. The 30-year-old also decided too late several times for the last pass. But that didn’t matter tonight. Because others took control of the Brazilians. Above all, the strong Casemiro, who directed the midfield of the Seleção. And of course Richarlison.

When Vinicius Júnior dribbled down the left flank again, he found the 25-year-old striker in the centre. He put the ball up himself, turned to the side – and then volleyed it into the net with a side pull.

Energy or nutrition: The biofuel should be out of the tank