Are there murky ties between Sam Bankman-Fried and SEC Chairman Gary Gensler?

by Nicholas
in Crypto
0

A mysterious meeting between Sam Bankman-Fried (SBF) and Gary Gensler, the chairman of the SEC will have set the crypto community ablaze, which has looked into the family of the ex-CEO of FTX. The aggrieved investors are demanding clarification of the supposedly murky ties between the two men, and petitions have already gathered more than 9,000 signatures. Update on what we know so far.

How to buy NFTs on the Crypto.com Marketplace?

The initiative was shared by the site CryptoLaw, which indicated on Twitter that the two petitions – one for residents of the United States, the other for the rest of the world – sent 9,000 messages to the US Congress. This is to encourage the US government to open an investigation into the links between Sam Bankman-Fried, the former CEO of FTX, and Gary Gensler, the chairman of the Securities and Exchange Commission (SEC), who is a American financial police.

🚨UPDATE! 💥
As of this hour, over *9,000* messages have been sent through our Connect to Congress app to demand a Congressional investigation of @GaryGensler‘s actions behind the scenes before @FTX_Official imploded.https://t.co/GzHabgv36z

So what do we blame Gary Gensler for? This last would have met Sam Bankman-Fried, on March 23, according to a document posted yesterday on Twitter by user FoiaFan. Here we learn the general subject of the discussion:

“Members of Gary Gensler’s team met with teams from IEX and FTX pto discuss custody of securities in digital assets.»

According to Sen. Tom Emmer, who has since deleted his tweet, FTX and Sam Bankman-Fried allegedly worked with the SEC in order to “obtain a regulatory monopoly” with the American policeman: 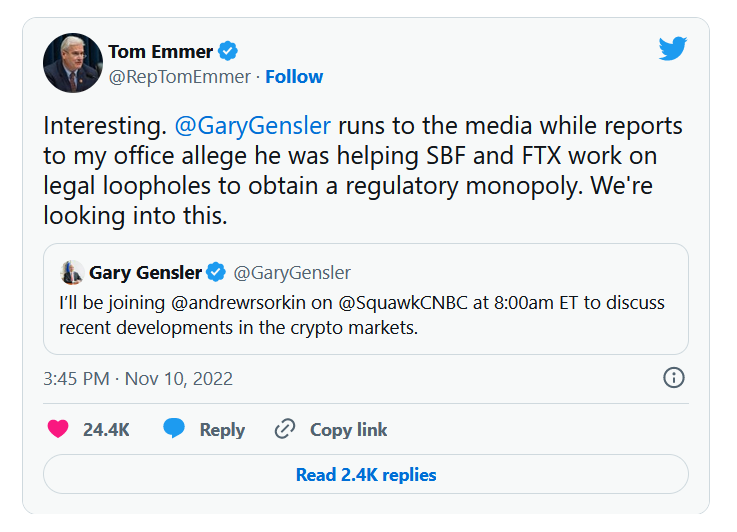 This partially corroborates the statements of Changpeng Zhao, the CEO of Binance, who had rightly criticized SBF for playing for his team, leaving aside other players in the industry.

👉 To go further – Who is Sam Bankman-Fried (SBF), the founder of FTX and Alameda Research?

The French unicorn of crypto wallets 🔒

A complete crypto experience, from buying to securing

Ties between the families of SBF, Caroline Ellison, and the SEC?

Another point raised by a few commentators: the father of Caroline Ellison, the CEO of Alameda Research and ex-partner of Sam Bankman-Fried, would have direct links with Gary Gensler. As for SBF’s mother, she would have worked for Hillary Clinton. This raises the question of possible links with the Democratic Party as a whole:

good job @CGasparino. @GaryGensler‘s old boss at @MIT is the father of Alameda’s CEO Caroline Ellison. The GC of @FTX_Official used to be lead counsel to Gensler when he was @CFTC Flesh. @SBF_FTX‘s mom was Hilary’s lawyer and a Democratic operative. SBF was #2 Democratic donor. https://t.co/SvTIrGW6jd

“Gary Gensler’s former boss at MIT is the father […] by Caroline Ellison. FTX’s general counsel was an adviser to Gensler when he ran the CFTC. SBF’s mother was a lawyer for Hilary [Clinton] and a Democratic agent. SBF is the second largest donor to the Democratic Party.»

If true, Sam Bankman-Fried’s relationship with the SEC/Democratic Party would actually be more trouble than anticipated. It will be recalled, however, that we must remain cautious in terms of information at the moment, the crypto community being particularly emotional since the fall of FTX. We will therefore continue to follow this story closely.

Order our Book to understand everything about cryptos

Receive a summary of crypto news every Monday by email 👌

What you need to know about affiliate links. This page presents assets, products or services relating to investments. Some links in this article are affiliated. This means that if you buy a product or register on a site from this article, our partner pays us a commission. This allows us to continue to offer you original and useful content. There is no impact on you and you can even get a bonus by using our links.

Investments in cryptocurrencies are risky. Cryptoast is not responsible for the quality of the products or services presented on this page and could not be held responsible, directly or indirectly, for any damage or loss caused following the use of a good or service highlighted in this article. Investments related to crypto-assets are risky by nature, readers should do their own research before taking any action and only invest within the limits of their financial capabilities. This article does not constitute investment advice.

Journalist at Cryptoast, I fell into the pot of cryptocurrencies a few years ago. I am passionate about the innovative technologies that stem from the blockchain and I like to find the most crispy information to share with you.

How to buy NFTs on the Crypto.com Marketplace?

The Bybit platform lays off 30% of its employees