Big tech in the big race

The year 2022 proved to be quite an effective stress test for many companies, both big and small. To be fair, something like 2021. And 2020. Damn, it’s been a rough few years hasn’t it? The stock market sank into a deep bear market, and right now the question on everyone’s lips is when/if it’s going to recover. But in these times of darkness, it’s often better to look where there is light, and contemplate well-known brands that may offer unexpected opportunities. With that in mind, let’s talk about Apple, Google, and Nvidia.

First though, it’s important to consider the overall market situation, so we’ve chosen the S&P 500 index to analyze as it tracks 500 of the largest publicly traded US companies. The last 12 months have not been kind – the index has dropped over 15% in that time. 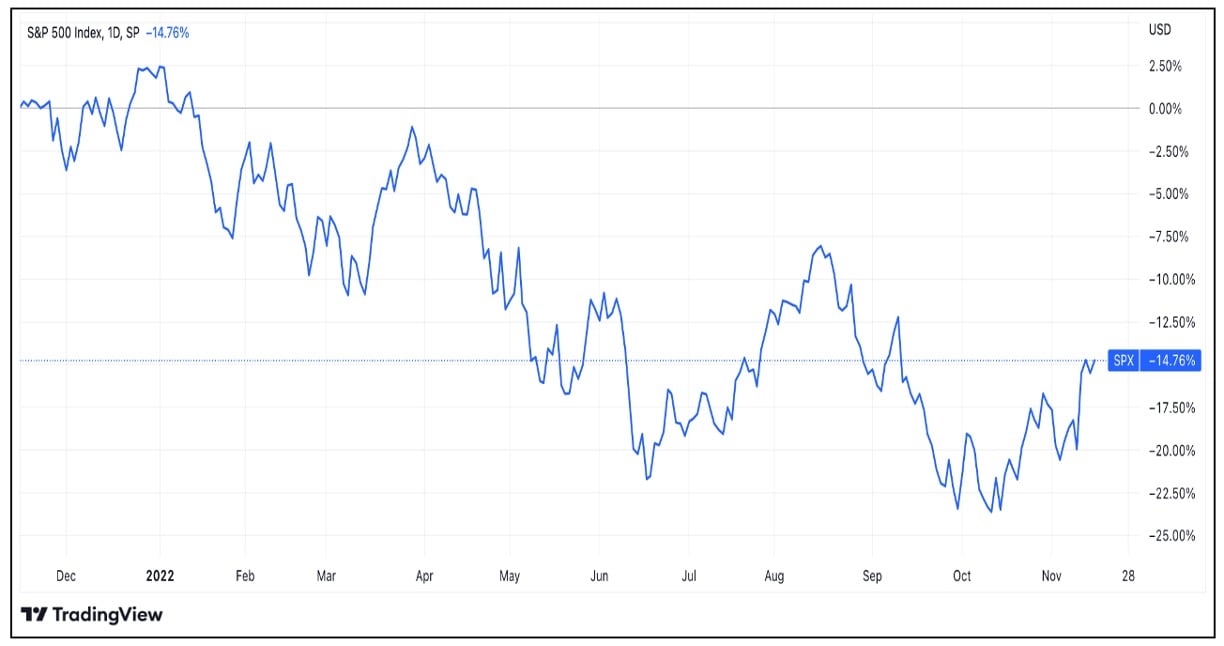 Now let’s see how Apple, Google parent Alphabet, and Nvidia have fared during this time. There is a clear leader of the group in Apple, but it’s also kind of a “best of the bad bunch” situation. Take a look. 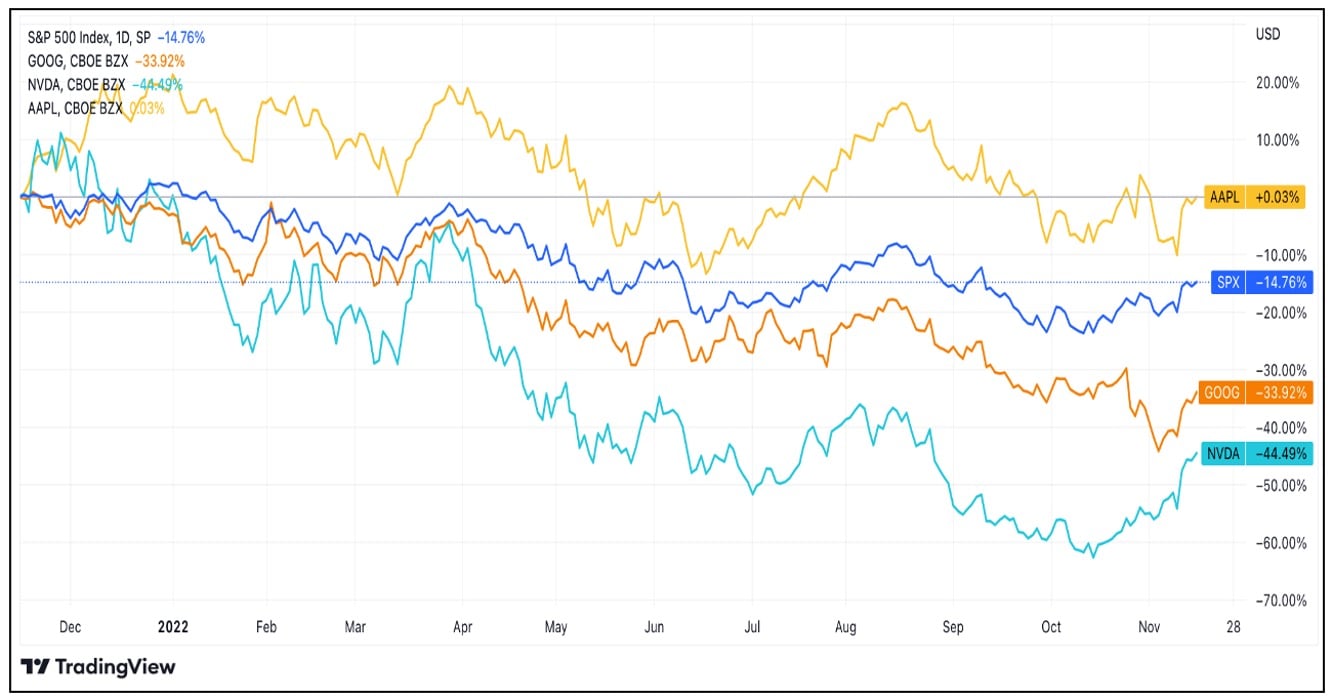 So, why have we chosen these three companies for reference, we hear you ask. Well, it’s pretty simple – they’re the biggest by market cap from the list of possible beneficiaries of 5G technology development, or 5G stocks. On top of that, we know these brands as key players in the tech market and many of us use their products in our everyday life.

Apple joined the 5G club in 2020 by introducing the first 5G-capable iPhone. Its iPhone 12 and following models support 5G networks thanks to 5G modem chips provided by Qualcomm, which is another company at the 5G party. And Apple isn’t going to stop there, the company plans to manufacture its own modems (together with Taiwan Semiconductor Manufacturing Company; yep, another 5G player) and hopes to use it in the iPhone 15.

Will 5G become a key element in Apple’s future? Perhaps not, sadly we don’t have a crystal ball. But analysts around the world do believe that Tim Cook’s company will receive a boost in the next 12 months – the average forecast for Apple stock for an upside of 16%.

A smartphone is also what connects Google and 5G tech. The industry behemoth is trying to fish in Apple’s waters (an easy way to end up out of one’s depth). Google added 5G technology to its smartphone – Pixel 5 – and continued the 5G device era with its Pixel 6 and Pixel 7.

Look, they’re hardly reinventing the wheel here, but analysts seem to think it’s enough to support a buy of the stock – the average forecast for the next 12 months sees growth of 26% for GOOGL.

The next one to look at is Nvidia. And no, this company didn’t create a 5G phone or even a 5G graphics card – the aim of Nvidia is to build a platform that brings together developments in AI and 5G. The 5G technology is capable of speeding up the work of AI algorithms and applications, and extending their influence to all connected devices. AI-on-5G is a platform ready to kick-start smart cities, security systems, automation, and much more. It’s a brave new world.

Despite all those grand plans, Nvidia’s stock has still seen harsher declines than other assets from our list — down about 45% over the last 12 months. That being said, analysts still expect some growth from this brand, with the average forecast seeing a 12% upside in the next year.

There are no guarantees in this life, but many experts seem confident that investing in market monarchies like Apple, Google and Nvidia will bring you some royal returns. That being said, the overall market is still very much in the red and analysts are far less certain of the potential for returns there, which could mean the year-end situation for these stocks is less optimistic. Either way, it’s important to always do your own research before buying or selling any assets – that’s the only thing that can bring you closer to success.

4 Cool Reasons To Use Voice Overs For Your YouTube Videos

This weekend only – Popular Dyson products are up to 100 euros cheaper in “Cyber ​​Week”.

4 Cool Reasons To Use Voice Overs For Your YouTube Videos

This weekend only – Popular Dyson products are up to 100 euros cheaper in “Cyber ​​Week”.

Hulu’s ‘Legacy’ Feels Like Yet Another Story About the Showtime-Era Lakers: TV Review