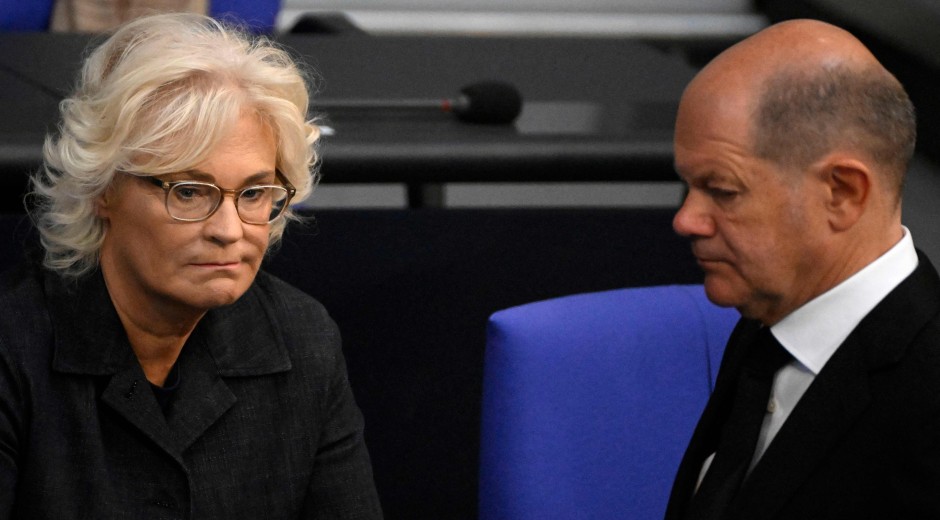 The reinforced Bundeswehr brigade, around 8,000 soldiers, has hardly any artillery of its own and operates behind the moon in terms of radio technology. Lambrecht’s ministry describes such deficits as “qualified errors”. And then the Puma disaster from the weekend. The prestigious NATO brigade is better equipped with loans from the entire army.

Lambrecht has not yet managed to improve the miserable material situation. She didn’t even try to reorganize procurement and her ministry. Is it just too much work for her? The SPD politician lacks the competence and commitment for the biggest security policy task in decades.

The army’s initial hope for better equipment and thus chances of survival in the event of war give way to great disappointment, of which Lambrecht, of course, does not want to hear anything. While the military commissioner Eva Högl (SPD) and others describe the needs every day and call for a courageous change of course, Lambrecht speaks of happy soldiers who were introduced to her when they visited the troops.

She doesn’t seem to want to know any better. She demoted her parliamentary state secretaries to small cogs in the Ministry of Defense. State Secretary Margaretha Sudhof, Lambrecht’s companion from previous offices, belongs to the circle of comrades in the house management. In twelve months, she hasn’t managed to deliver an inventory of 30 or 40 pages. But there can be no reform without taking stock: Lambrecht ordered it early on, after she had rejected the proposals of the Inspector General and her predecessor when she took office.

In parliament, Lambrecht alienated her coalition partners. For the cabinet, it has become a burden due to unsatisfactory work results and private service embarrassments. What Lambrecht offered to help Ukraine at the start of the Russian invasion, a few helmets and moldy GDR-style FPGs, made a laughing stock of Germany. In the beginning, Lambrecht didn’t even notice that in her left bubble.

It was only when the American Secretary of Defense held a major donor conference for arms deliveries in Ramstein, in the middle of Germany, that Lambrecht and Chancellor Olaf Scholz gave in and promised a few decommissioned anti-aircraft tanks. Under massive pressure from the Bundestag, the armaments aid has meanwhile become larger and more effective. That is not Lambrecht’s merit. To this day, she has not dared to go to Kyiv.

It was a mistake to make her secretary of defense

The SPD politician, who no longer ran for the Bundestag, wanted to start a new life as a lawyer after two decades in parliament and posts in three ministries. But after winning the election, she suddenly wanted to become interior minister, but was given the defense portfolio: a wrong decision by the chancellor, from which Lambrecht is also visibly suffering. She doesn’t seem to be really interested in the Bundeswehr. In 23 years as MP, she had never visited soldiers on foreign missions. Her interest in foreign policy issues was minimal.

Many citizens are concerned that the Bundeswehr would not be able to defend the country today. In his “Zeitenwende” speech, Chancellor Scholz promised to spend two percent of economic power on defense every year from now on. An operational division was announced to NATO and a combat brigade to the partners in the Baltic States. The Bundeswehr received 100 billion euros for the immediate improvement. Lambrecht should have acted courageously and proved her predilection for difficult tasks. But their balance sheet for the year is poor: the two percent target will be missed this year and next, and almost nothing of the 100 billion has been spent so far, apart from a risky aircraft order.

Instead of procuring ammunition for at least 30 days, the supplies last for two to three days of fighting, and the trend is shrinking. The minister initially ignored the need, then wrote a begging letter to Finance Minister Christian Lindner. He had a refusal aligned, but offered help with the reorganization of the Ministry of Defense – another disgrace for Lambrecht. A year after she took office, ten months after the outbreak of war, the conclusion is: It was a wasted year for the Bundeswehr, a bad year for Germany’s security.

German arms exports: A quarter of the arms aid goes to Ukraine

Crypto.com Avis cards (2022): comparison of crypto-cards and their advantages