Messi and Ronaldo at chess – that’s behind the game 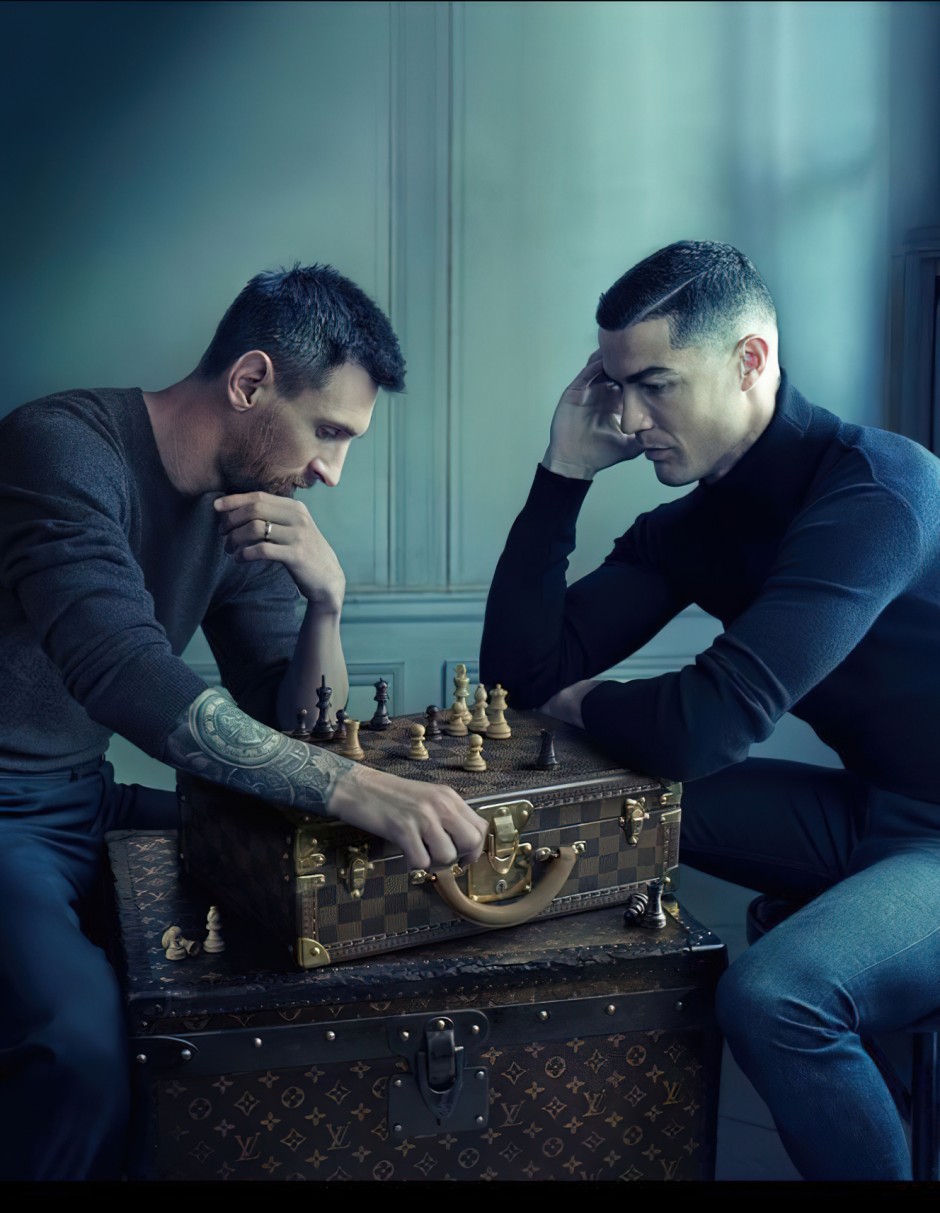 An the evening before the first game of the World Cup, Cristiano Ronaldo and Lionel Messi published a photo that supposedly shows them both engrossed in an impromptu game of chess. The chess pieces are not on a board. A checkered suitcase serves as a playing field, unmistakably from the French luxury brand Louis Vuitton. The photographer is also top notch. The American Annie Leibovitz is one of the best paid in her profession.

Even the perfect lighting indicates that nothing in the photo is improvised. A larger example in the brand design serves as a pedestal under the checked case. Messi’s rolled-up sleeve reveals a forearm tattoo that harmonises with the checkered and logo patterns. Ronaldo sits in such a way that the full length of his side parting is visible. Even the fact that the Portuguese and five-time world footballer of the year looks away over the figures fits perfectly. The only one who still has a choice in the constellation is Messi, who is fixated on the figures.

The Argentinian and seven-time world footballer of the year can decide whether to force a draw with check bids from his queen or try to win again, which would of course be out of place. Despite the unclear demarcation on the suitcase, which has more diamonds than the eight by eight squares of a chessboard, connoisseurs quickly discovered that the position was from a game played in 2017 in Stavanger, Norway, between world champion Magnus Carlsen and the streamer, who is now earning similarly well Hikaru Nakamura comes from. Two moves later, the American claimed a draw. It is not known whether Messi and Ronaldo dared to play a game themselves during their photo shoot, or whether they moved the figures at all.

Their perfectly lit and arranged game didn’t have any losers, but strictly speaking it doesn’t fit the campaign slogan “Victory is a State of Mind”. It can of course be considered a profitable idea. By Sunday afternoon, the chess photo had already been liked 55 million times on Instagram, which are amazing numbers even for world footballers with 375 million (Messi) and 499 million followers respectively.

During the pandemic, millions have discovered online chess. Since the series hit “The Queen’s Gambit”, the game is no longer considered boring, but cool. From figure skating to tennis to Formula One, sports stars are posting photos of chess on social media. American football pros recently held a tournament.

The game not only promotes personal image, but also strategic thinking and an understanding of tactical diagrams used in team sports during preparation. The former German national player Mesut Özil once understood in school chess that the next moves of opposing defenders are predictable.

Incidentally, world chess champion Carlsen has already thanked Ronaldo and Messi for using his game against Nakamura with a mocking tweet: “The second greatest rivalry of our time imitates the greatest.”

*** BILDplus content *** For night owls, wellness and bargain hunters – which gym is perfect for you