Sanctions threaten: DFB captain Manuel Neuer plays at the World Cup without a “One Love” bandage 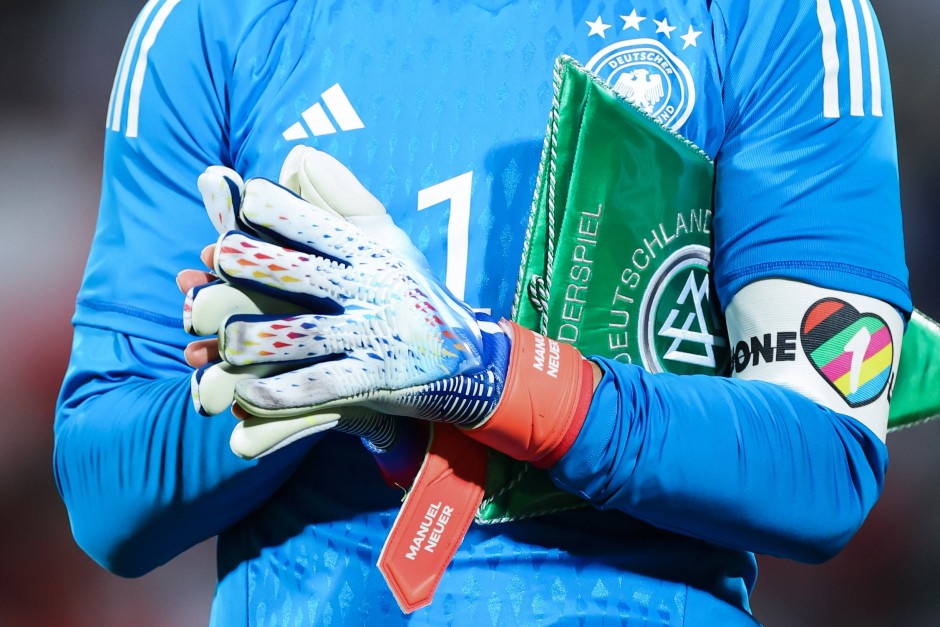 Dhe “One Love” armband of the European captains around Manuel Neuer led to a big rift with the world governing body FIFA on the second day of the World Cup. According to information from the German Press Agency, FIFA put a lot of pressure on the UEFA participants involved in the campaign for human rights and diversity – and threatened sporting sanctions. The German Football Association and the other associations are now doing without the symbolic piece of fabric in Qatar.

“We are witnessing an unprecedented event in World Cup history. We will not carry out the confrontation brought about by FIFA on the back of Manuel Neuer,” said DFB President Bernd Neuendorf on Monday. The association also announced that fines would have been accepted. “However, we cannot put our players in a situation where they are warned or even forced to leave the field.” The DFB is “very frustrated with FIFA’s decision”.

The decision was preceded by intensive consultations between the UEFA working group and FIFA on Monday, which had already taken place on Sunday. Sporting sanctions such as a yellow card are not clearly covered by the FIFA Statutes.

The fan organization “Football Supporters Europe” sharply criticized the process. “Today we feel contempt for an organization that has proven its true values ​​by showing players the yellow card and tolerance the red card,” tweeted “FSE”.

“The fact that FIFA wants to punish us on the pitch is unique and goes against the spirit of sport, which unites millions,” said the Dutch association KNVB. “We stand by the ‘One Love’ message and will continue to spread it, but our number one priority is winning games. You don’t want the captain to start the game with a yellow card.”

The first captain to openly violate FIFA regulations during the finals would have been England’s Harry Kane in this Monday’s game (2:00 p.m. CET in the FAZ live ticker for the World Cup, on ZDF and on MagentaTV) against Iran. “We were willing to pay penalties, which would normally be the case for violating dress regulations. However, we could not put our players in a situation where they could get a yellow card or even be forced to leave the field,” said the joint statement distributed by the English FA, to which the DFB also belonged.

The campaign was a joint effort announced in September by teams from Germany, England, the Netherlands, Belgium, Switzerland, Wales, France, Denmark as well as Norway and Sweden, both of which have not qualified for the World Cup. France’s captain Hugo Lloris announced early on that he would not wear the bandage.

FIFA only presented its own new captain’s armbands on Friday – two days before the opening game. “The participating teams will have the opportunity to send messages during the games via the team captains’ armbands,” said the world association. According to the announcement, FIFA devised the messages together with three United Nations organizations. In a statement on Monday, the association explicitly emphasized Article 13.8.1 of the Equipment Rules: “For FIFA Final competitions, the captain of each team must wear an armband provided by FIFA.” FIFA supports campaigns such as “One Love”, but this must be done within the framework of the rules known to all.

According to dpa information, the rule paragraph for (prohibited) political messages is also in focus. “In the event of a breach of this provision, the player and/or team will be sanctioned by the competition organiser, the national football association or FIFA,” the international rules state.

Meanwhile, it was also announced this Monday that Interior Minister Nancy Faeser will be traveling to Qatar for the German national team’s opening game. The SPD politician responsible for sport will continue to travel to the emirate after her visit to Turkey, said a ministry spokesman for the AFP news agency. The team of national coach Hansi Flick meets Japan for the tournament opener on Wednesday (2:00 p.m. CET in the FAZ live ticker for the soccer World Cup, on ARD and on MagentaTV).

According to the spokesman, Faeser emphasized that she also “would like to continue the dialogue with the Qatari government on reforms there, in particular to improve the human rights situation”. The host of the World Cup has been heavily criticized for human rights violations.