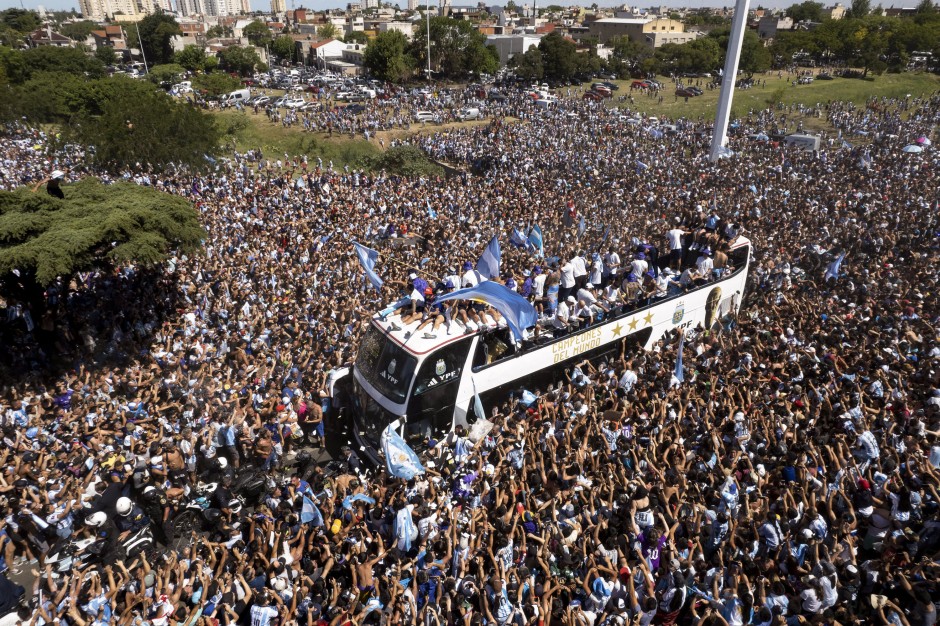 An view of the enormous crowds, the fan parade to welcome the world champions in the Argentine capital, Buenos Aires, has been canceled. After the bus with the national team had hardly made any progress for several hours, the players left the vehicle at a sports facility on Tuesday and boarded two water police helicopters. They then skimmed the waiting fans in downtown Buenos Aires. Millions of people cheered the players in the helicopters.

The national team set off for the capital on Tuesday afternoon in an open-topped bus from the grounds of the AFA Football Association outside the gates of Buenos Aires. In view of the huge crowd, however, the bus only advanced at walking pace or sometimes not at all. The team would have needed hours on the planned route. According to the police, around five million people were out and about in Buenos Aires.

Association President Claudio Tapia raised allegations against the security authorities. “They didn’t allow us to greet all the people at the obelisk and the same security forces who escorted us didn’t allow us to proceed. A thousand apologies on behalf of all champion players. Shame,” he wrote on Twitter.

Meanwhile, two fans jumped onto the bus of captain Lionel Messi’s team. A man jumped from a bridge onto the team’s open-top double-decker bus Tuesday, according to videos released by La Nación newspaper. Several players tried to dissuade him from his plan with a show of hands. A second man landed on the back of the bus, slipped, and fell onto the street. It was initially unclear whether he was injured.

Ukraine live ticker: Zelenskyj: Will liberate all parts of Ukraine

The Best Projectors to Buy on Amazon Right Now

7 Best Jackets You Should Wear This Winter