3: 2 against Ghana: Portugal trembles for the opening victory 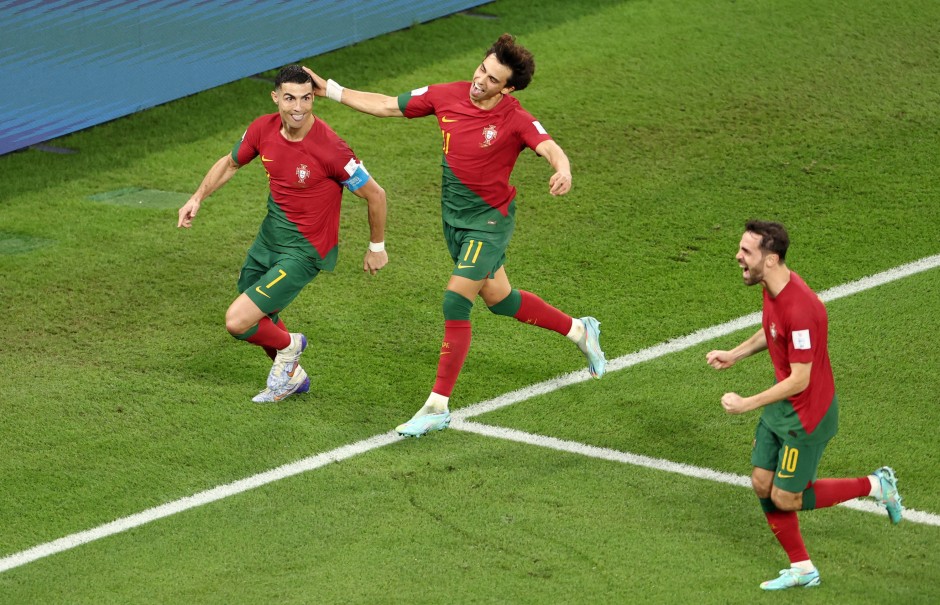 Dhe hype that is now going on around Cristiano Ronaldo is not only crazy when the superstar makes headlines because he is kicked out of his club like this week at Manchester United or when he sets a record again. During his first appearance at this World Cup, a 3:2 (0:0) victory for Portugal against Ghana, one touch of the ball was enough to make thousands of people squeal in delight. “I quit my job to see the last dance of the greatest of all time,” read a sign that also showed a picture of the now 37-year-old goalscorer. Football fans practice a bizarre cult of personality around this man, and indeed Ronaldo once again achieved historic things.

After his penalty goal to make it 1-0 (65th), Ronaldo is the first person to have scored at least one goal in five World Cups. “It was a beautiful moment. My fifth World Cup, we won. That was very important. The world record is something that makes me very proud,” said the attacker, who had been without a club for a short time, after the game.

It was a dubious goal though, as the penalty was preceded by a duel between Ronaldo himself and Mohamed Salisu, which can only be considered a foul with very, very goodwill from the referees towards the Portuguese. Ghana’s coach Otto Addo was correspondingly angry after the final whistle: “Congratulations, but of course that was a nice gift from the referees,” said Addo sarcastically. “The fact that you don’t even look at this scene is crazy,” complained the former Bundesliga player. Portugal coach Fernando Santos, on the other hand, saw things a little differently: “If the video referee thought something was wrong, he would have intervened.”

The world association FIFA now has the first superhero story of the tournament. As if he had guessed that he would be given such generous gifts, he declared before the game: “I’m happy, this is my fifth World Cup, the goals will come naturally.”

In the final phase it gets wild again

Before that, apart from a few Ronaldo moments, not much had happened: a shot saved by Ghana goalkeeper Lawrance Ati Zigi (10′), a dangerous header (13′) and a goal that didn’t count because of a foul in the making ( 31.). It was a great achievement for the Ghanaians, who are entering the tournament with a team full of players who are little known compared to the many Portuguese professionals from the best clubs in the world.

But they had a mission: Ghana entered the tournament as the last of the five African entrants and were finally set to score the continent’s first goal after Tunisia, Senegal, Morocco and Cameroon failed to score a goal in their games. And Addo, who will return to his position as top talent coach at Borussia Dortmund after his job as Ghana World Cup coach, was able to celebrate this goal. At first, apart from two long-range shots by Mohammad Kudus (55′, 72′), his team was fairly safe. But in the 73rd minute, the “Black Stars” managed a breakthrough on the left side of the attack, and André Ayew pushed Kudus’ cross pass into the goal to make it 1-1.

Now the game picked up speed, in the course of which not much had happened in front of the gates for a long time. The Portuguese concept seemed far too tailored to Ronaldo for more than an hour and the Ghanaians barely appeared in the 2016 European champions’ half of the game.

It was only after the first goal was scored that there was a lot going on, also because Ghana had lost the previously very good order a little. Suddenly João Félix had a lot of space and scored after an excellent pass from Bruno Fernandes to make it 2-1 (78′), before Rafael Leão scored the game again after a pass from Fernandes to make it 3-1 (80′). But the Ghanaians now fought back full of passion. Osman Bukari actually made it 3:2 (89th) and there were nine minutes of stoppage time, which were very exciting, especially when Inaki Williams got a great chance to equalize from the Portuguese goalkeeper Diogo Costa shortly before the final whistle.

Ronaldo was substituted in the 88th minute to the cheers of the crowd and had to wait for the final whistle on the bench. In the end, however, he was able to celebrate. About a new unbelievable world record and a nice victory for his team at the start of the tournament.

When the rains came: FIRST ONSITE reflects on one-year anniversary of B.C. Floods

Spread betting: what is it and how can you make money?