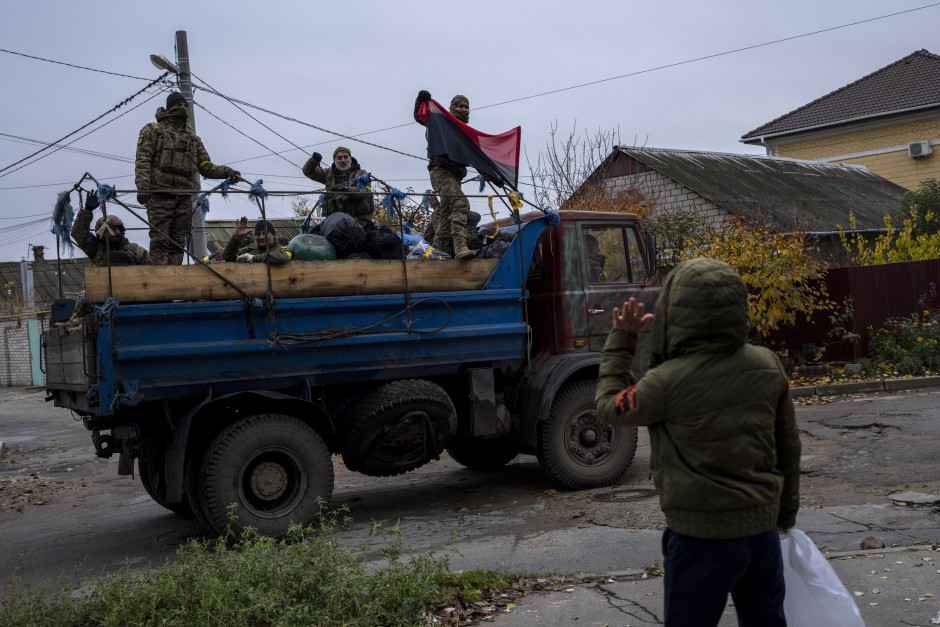 DAccording to official reports, the Ukrainian authorities are finding more and more evidence of atrocities committed by the former Russian occupiers in the liberated areas around Cherson, Kharkiv and Donetsk. In the past two months, more than 700 bodies have been discovered in these areas, Prosecutor General Andriy Kostin said on state television. Around 90 percent of the cases involved civilians.

In Ukraine, meanwhile, technicians are working feverishly to repair the damage caused by the Russian attacks and restore electricity to the country. The resumption of rail traffic between Kyiv and the liberated city of Cherson was celebrated as a sign of the desired normalization of life in the previously occupied areas – a train from the capital arrived there for the first time in a good eight months. Heavy fighting between Russian and Ukrainian troops continued in eastern Ukraine.

“Every day we receive new information”

“We found places where they killed peaceful civilians practically in almost every village in the Kharkiv region,” Prosecutor General Kostin said on television. Investigators are now making similar discoveries in the recently liberated Cherson region in southern Ukraine. About 20 places were also discovered where civilians were interrogated and held captive. “And every day we get new information,” Kostin said. Such statements by the warring parties can hardly be verified independently.

Earlier this week, Russia caused nationwide power outages in Ukraine with massive attacks on the energy infrastructure. At times, around ten million people were without electricity. According to Zelensky, around 50 percent of the energy infrastructure has been destroyed or damaged. Moscow wants to put further pressure on its neighbors with these attacks before the onset of winter.

Will Russia produce Iranian drones itself in the future?

According to a US media report, Russia has signed an agreement with Iran to produce Iranian attack drones for the war against Ukraine in its own country. Work is currently underway to get production going within months, wrote the Washington Post, citing intelligence information. The agreement was negotiated in Iran in early November. The Russian army uses the drones, among other things, for attacks on the Ukrainian energy infrastructure.

A train from Kyiv arrived in the recently liberated city of Cherson for the first time in eight months on Saturday. 200 passengers got tickets under the motto “To Victory”, as Ukrainian media reported. The seven wagons had been brightly painted by artists. Hundreds of onlookers with Ukrainian national flags cheered the arrival of the special train at the station.

The railway connection between Kyiv and Cherson was interrupted immediately after the start of the war on February 24th as a result of the invasion of Russian soldiers. The Dnipro region was only recently liberated after the Ukrainian military forced the Russian occupiers to retreat across the river.

In Kherson, an action to voluntarily resettle civilians in safe areas in the west of the country began on Saturday. Helpers are ready to bring anyone who wishes to other parts of the country where the government guarantees accommodation and supplies, Ukrajinska Pravda reported, citing the authorities.

According to the Ukrainian General Staff, the Russian armed forces are increasing their troop presence in the Luhansk region. In order to accommodate the many soldiers, part of the civilian population will be forcibly resettled, the general staff in Kyiv said on Saturday. The eastern Ukrainian region of Luhansk borders with Russia.

Meanwhile, Russian and Ukrainian troops continued fighting in a variety of hotspots. According to the General Staff, tanks, tube and rocket artillery and grenade launchers were used. According to the Ukrainian military, up to 60 Russian soldiers were killed or wounded in the Mykhailovka region in the Zaporizhia region alone. The Russian military spoke of Ukrainian rocket attacks on the Zaporizhia nuclear power plant. This information could not be independently verified.

That will be important on Sunday

In Poland, the second victim of the recent rocket attack is to be buried with a state funeral on the site of a granary in the border area with Ukraine on Sunday. A rocket hit the village of Przewodow, just six kilometers from the border, on Tuesday, killing the 62-year-old tractor driver and a warehouse manager. The 60-year-old was already buried on Saturday with a closed state funeral in Przewodow.

Emmy Predictions: Lead Actor in a Limited Series or TV Movie – Can Himesh Patel Sneak Into the Lineup?

Rooms to dream: I would like to live here!